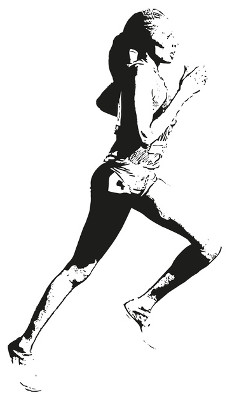 Visit any track on club night or before a race meet and watch the athletes for ten minutes or so before they begin their session or race. The chances are you'll see lots of them performing strides.

You might also see strides referrred to as "striders" or "stride outs", and although definitions can vary, it's probably easiest to just think of them as "short, relaxed sprints executed with good form".

Strides come with a multitude of benefits and are a type of running that can safely be included year round, regardless of a runner's phase of training or their distance or race focus.

There are several immediate and long-term benefits that result from performing strides:

There is no strict definition on how fast a stride should be. The speed is likely to fall somewhere between about 400m and 1500m pace. Or about the pace you could maintain for 45 seconds to 6 minutes in a race situation. But don't worry too much about exactly how fast you're running. As long as it feels "fast, but not flat out" then you're probably in the right area.

The key is to balance the effort. You want to be running fast enough so that you're getting a good turnover, but not so fast that you cannot relax and running form is impaired.

Each stride should be short enough so that you don't begin to suffer the effects of a prolonged hard effort, which will affect your ability to run with good technique. If you are struggling to maintain form, breathing heavily or just suffering in general, then you are definitely running too far or for too long.

When planning any type of running session, be it short repetitions, or a longer steady run, it's best to consider time spent running rather than distance covered. Note that it's the duration of an effort that dictates intensity, not the distance. Obviously the two are related, but the problem with specifying components of a running session in terms of distances is that runners of different abilities expending the same effort over the same distance will take different times to complete that distance. Because of this they will be stressing their body to different degrees.

Having said this there is nothing wrong with repeating strides over a fixed distance, as long as the time it takes to cover that distance is in line with your ability. And using a measured distance actually has the benefit that it's much easier to run to a specific point than to monitor elapsed time while running fast.

The best approach is to first time yourself running for a given duration and note how much distance is covered.

Another good option when it's not convenient to use distances or monitor time is to work out how many steps you take in a given time and then count out a certain number of steps when performing strides.

How long you should spend performing a stride will depend on the intensity at which you are performing it. The table below gives rough guidelines.

You may find it useful, particularly for the faster paces, to begin with a rolling start or an acceleration zone. The time spent accelerating can also provide a useful opportunity to focus on the stride ahead and to adopt any techniques you wish to employ executing it.

The key with recovery is to take enough after each stride to ensure that you are fully prepared, both mentally and physically, to perform the following one to the best of your ability. 2-3 minutes is usually sufficient. After this time, a significant portion of energy stores will have been replenished. Feel free to recover while jogging if you're doing the strides as part of a longer run. Just be sure that you've recovered well enough to attack each stride with full concentration and good form.

If you're warming up before a race – and to a lesser extent before a training session – then bear in mind some advice that you should also be following for the rest of your warm up: do as little as possible to achieve the intended goal. You don't want to do such a large warm up that you end up too exhausted to race well. 3-5 short strides is probably a good number, although if a race is running late it's a good idea to include a few extra to keep warm and limber.

As part of an easy/steady run 6-8 is about right. Much more than this and you risk over-exerting yourself (which is not the goal of easy or steady runs).

You can also make strides the main focus of your session (see below). In this case a good target is 12-30.

Ideally strides will be performed when you're warmed up, but still fairly fresh. They can be included in various places:

The most important thing to consider when choosing where to perform strides is safety. When you're running fast you have less time to react to obstacles and you're more likely to be affected by the terrain and weather conditions. Since you are likely to be concentrating hard on your technique you may also be less aware of the surrounding environment.

Ideally you'll be able to perform your strides on a flat terrain with good traction and no camber. If conditions are wet or you're unsure how well you'll cope with running fast then gradually build the speed of each subsequent stride.

Running tracks, being designed for running, are unsurprisingly ideal for strides. The surface is guaranteed to be flat and consistent. You may want to wear spikes in wet weather.

Pick an area free from traffic (definitely vehicular and ideally also human) and without a camber. Tarmac is preferable to paving slabs, which can often be uneven. You are far more likely to get injured when running fast and things that can be a minor inconvenience at slower speeds become hazardous when moving quickly.

Freshly-mown, lump-free grass is great if you can find it. Do take care since even short grass can sometimes hide hazards, so it's worth jogging over the area a few times to save yourself from any nasty surprises.

Running uphill is great for building strength and power and can force good running form (for example, it's much harder to run fast uphill if you don't get up on the balls of your feet or if you don't drive your arms or run tall).

Running fast on a gentle downhill is an excellent way to improve speed. Fast movement patterns are learnable at a neuromuscular level, which means that you can teach yourself to run faster simply by running fast.

By letting gravity lend a hand you can force yourself to run a little faster than you would ordinarily and the brain-muscle pathways associated with movement and coordination at speed will be engaged and improve as a result.

What to think about

When performing strides you should ensure good form at all times.

Telling somebody to "run with good form" is all very well, but what is good form? This will depend partly on such things as your body type and biomechanics, and if there's something specific you need to work on then strides are an ideal opportunity to practice. However, there are a few things that will benefit almost all runners:

Give strides a go and you'll add variety to your sessions, improve your speed, strength, power, coordination, form, technique, preparation, focus, efficiency, economy, range of motion, warm ups, enjoyment and be a better and happier runner.